Predicting which direction the price of Bitcoin will move is not easy, and that's why indicators exist. Bitcoin indicators are tools combined with technical analysis that can help traders predict the price movement of cryptocurrencies with more accuracy. Technical analysis relies on historical data to provide mathematical models of likely price action, and these models are turned into indicators. The data from the formulas are then drawn on a graph, and this is then positioned alongside or overlaid on a trading chart, thus helping traders make decisions.

Even though Bitcoin indicators cannot predict price movements with 100% accuracy, their justification comes from the fact that price movements have momentum, and the more price momentum we see in a particular direction, the harder it is to stop it. Therefore, indicators utilize graphs and formulas to give a clearer picture as to what buyers and sellers are likely to do next.

Without much ado, let's get started on the best 7 Bitcoin indicators for crypto traders.

Developed around 40 years ago by Welles Wilder, a technical analyst, the RSI indicator helps traders identify when Bitcoin's price is too far from its "true" value; therefore, allowing a trader to take advantage before the market corrects itself. Using the RSI, traders can realize great trading entry points, and over time this Bitcoin indicator has proven to be an invaluable tool for trading the volatile crypto markets.

The RSI uses a complicated formula to determine if an asset, in this case, Bitcoin is overbought or oversold. The formula returns a value that ranges between 0-100 and can be presented on the chart using an oscillator -- a wave type-pattern.

An asset is considered oversold or undervalued when the RSI drops below 30. On the other hand, it's deemed to be overbought if the RSI goes above 70.

Bitcoin Indicators: How To Use Relative Strength Index (RSI)

It's easy to identify when an asset will cool off even for a short period, and this is visible if the chart is in the overbought territory. Once the RSI passes 70, you can be sure there will be a pullback. According to the chart above, the asset was in the overbought territory on six occasions. As a trader, overbought conditions offer a chance to take profits on a position or even close it entirely. A trader could also open a short position and profit from the downward price action.

The RSI also shows when an asset has reached a point of exhaustion after continuous bleeding by returning an "oversold" value. This is anywhere below 30, and it means it's highly likely that the bulls will take control and drive the price upward. The chart above shows that when the asset dropped below 30 RSI on four occasions over 11 months, each time it bounced back by rallying by 22% to 83% over the following few days. According to the two charts, it's clear that RSI offers good signals for traders more often than not.

Created in the 1980s by John Bollinger, a financial analyst, Bollinger Bands are utilized by traders for technical analysis. They work as an oscillator measurer, indicating whether the market has a high or low volatility or even if there are overbought and oversold conditions.

The main idea behind this Bitcoin indicator is to show how prices are spread across an average value. Bollinger Bands are composed of an upper band, a moving average line, and a lower band. The two outer bands react to market price action. They expand (move away from the middle band) when volatility is high and contract (move closer to the middle band) when volatility is low.

Standard Bollinger Band formulas set the centerline as a 20-day simple moving average (SMA). As for the top and bottom bands, these are calculated based on market volatility.

According to this setting, at least 85% of the price data moves in between the upper and lower bands, but can be adjusted depending on different trading strategies and needs.

Bitcoin Indicators: How to Use Bollinger Bands Therefore, if the price of an asset goes past the moving average and exceeds the upper Bollinger Bands, it's safe to say that the market is in an overbought condition (overextended). If the price touches the upper band several times, it could be a sign of a significant resistance level. On the other hand, if the price drops significantly and exceeds or touches the lower band several times, it's an indication of an oversold market, or the price has found a strong support level. Therefore, Bollinger Bands are suitable for short-term trading as you can analyze the market volatility and try to predict the movements that are likely to come.

Of the Bitcoin indicators, the Moving Average indicator is used to smooth price action over a given period. MA is a lagging indicator meaning that it's based on previous price action. There are two types of Moving Averages; simple moving average and exponential moving average. As a trader, the MA you opt for depends on your trading style. So, if you are a short-term trader, a shorter MA is more effective for your trading style, while a longer MA is suitable for a long-term trader. In trading, MA acts as a support or resistance.

Bitcoin Indicators: How to Use Moving Averages

MA slopes can help a trader define a trend, and doing this is quite simple. Once you find out that the MA is sloping upwards, it means the asset is in an uptrend or gaining in price. But, if the MA is sloping downwards, then this means the asset you are assessing is in a downtrend or losing in price. The chart below shows the slope changing towards the end, which suggests the price entering a downtrend. 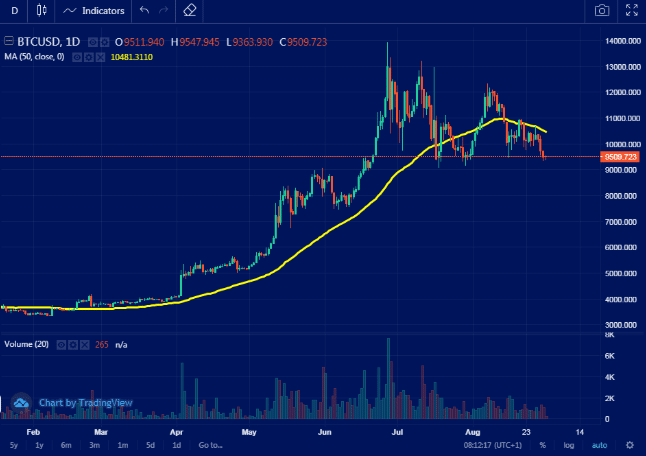 It's important to note that the MA is a lagging indicator. Therefore, a moving average slope can only help you define a trend. Due to this, a single moving average isn't reliable enough to be used to spot the transition from an uptrend to a downtrend.

Moving average crossovers offer another popular trading signal. To trade crossovers, you need to have two or more MA's on your chart. You can use only two crossovers to avoid cluttering your chart and ensure one of the moving averages (MA) is longer than the other.

Once you have a short-term MA and a long-term MA switched on your chart, watch out for the crossovers. This is what they mean: If the short MA crosses above the long MA, then this is a bullish trading signal. But, when the short MA falls below the long MA, then this is a bearish trading signal. The chart below shows how BTC triples after the 9 MA goes past the 50 MA on the 1D chart, thereby creating a bullish cross. 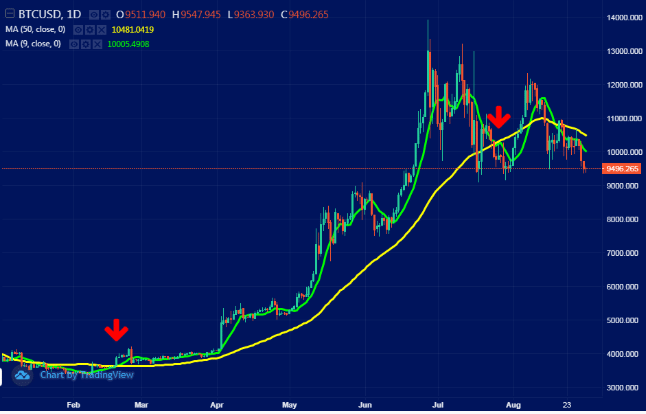 See the bearish cross in the chart below and the tremendous price drop that follows. 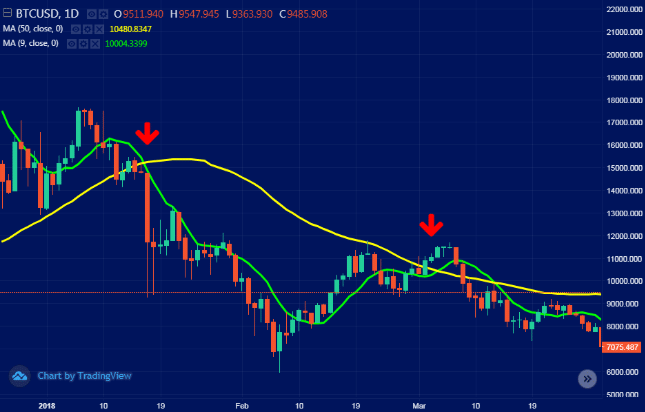 Better known as the moving average convergence/divergence (MACD), this is one of the more popular Bitcoin indicators for cryptocurrency trading. This is  due to its simplicity and also the ability to provide strong crypto trading signals. The MACD represents a trend following indicator that highlights whether the short-term price momentum is moving in the same direction as the long-term price momentum, and in cases where it's not, then it's used to determine if a trend change is near. The MACD consists of four components; MACD line, signal line, zero line and histogram. 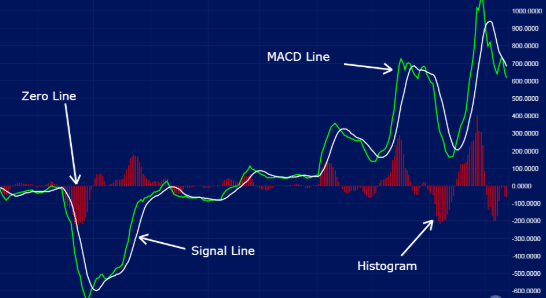 Bitcoin Indicators: How to Use MACD

To get the MACD line, subtract the 26-EMA from the 12-EMA. EMAs are used over regular MAs to improve sensitivity to trend changes and price momentum.

The signal line, by default, is a 9-period EMA when the signal line is combined with the MACD line, where the two lines converge, diverge and cross forms the basis for many trading signals.

The zero line is the level where the MACD line is at zero. Both the 26-period EMA and 12-period EMA are the same at this line.

Unlike other Bitcoin indicators, the MACD has no absolute range; thus, it's not suitable for assessing oversold and overbought conditions.

When two oscillating lines crossover, the two common trading signals you can generate using the MACD include: bullish -- where the MACD crosses over the signal line or bearish -- where the signal line crosses over the MACD line. And since these crossovers happen quite often, you could experience a lot of false positives. Therefore, you are better off combining these signals with others to generate better trading decisions.

This indicator predicts the potential support and resistance levels for an asset's price action. The word Fibonacci comes from the Fibonacci sequence brought about by Leonardo Pisa, an 11th-century mathematician. The Fibonacci sequence is derived from a sum of the preceding two numbers, with each number roughly 1.618 times greater than the one that came before it. The result is a value known as "phi" or the "golden ratio," which has a fascinating relationship with almost everything in nature.

This phenomenon extends even to trading when traders analyze price action. This allows one to derive levels in a trend in which the price is likely to respect. This is achieved by dividing the peak to trough distance or trough to peak distance by the phi and other ratios in the sequence. Some other crucial ratios include 0.382 and 0.236. As you gain experience trading, you will realize that price reacts to these levels regularly; thus, it can offer you optimal entry and exit points.

However, before using Bitcoin indicators such as this one to identify potential support or resistance levels, you must be able to locate a "swing high" and "swing low." A swing high is a candlestick at the peak of a trend at any given time frame and has a lower high on its sides, whereas a swing low is the low candlestick of a trend that has a higher low on either side. When you identify these points, you can select the Fibonacci retracement tool in your trading software and connect a swing low to swing high.

This way, you will be able to generate potential support levels, also known as retracements. Each support level is derived by dividing the vertical 'trough to peak' distance by ratios within the Fibonacci sequence.

To find resistance levels, follow the same process but, in this case, connect the swing high to swing low.

Bitcoin indicators such as the Stochastic Oscillator show momentum by comparing the closing price of Bitcoin with its high-low range over a given period. The good thing is, this indicator works excellently no matter the volatility.

Where C is Latest Close, L14 is Lowest low for the last 14 periods, H14 is highest high for the same 14 periods, and %K Slowing Period is 3.

However, there is no need to panic about the calculation since chart software and trading platforms will process the formula and provide you with a stochastic oscillator, as you will see in the chart below. All that is needed is knowledge of how to use the oscillator to make the most for your efforts. The indicator reads on a range of 0 to 100 with the area above 80, showing overbought conditions and the one below 20 representing oversold conditions. Trend reversal signals appear when the %K line and the %D line cross in the oversold (below 20.00) or overbought (above 80.00) region.

The Ichimoku Cloud indicator consists of five lines, with each line displaying averages over specific periods, with a trader being able to determine how long they need to be. They represent some of the most visual Bitcoin indicators, and this makes them easy to interpret.  Also, they clearly define support and resistance, identify trend direction, gauge momentum, and provide several trading signals. 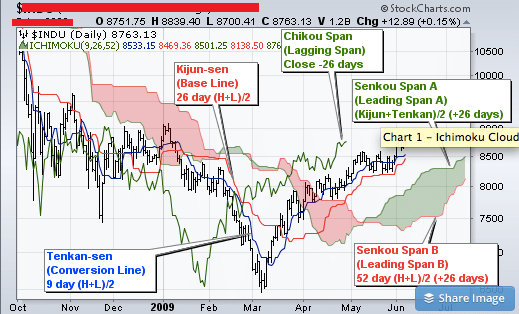